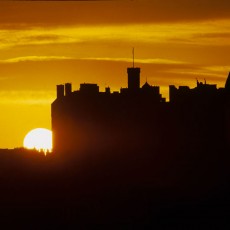 Battles and sieges were fought over it, royalty lived and died within its walls, and countless generations have been and inspired by it.

Fierce Iron Age warriors defended a hill fort here, and the nation’s oldest poetry tells of a war band feasting here for a year before riding to their deaths in battle.

The Scots and English struggled for control of the castle during the Wars of Independence. In 1314 it was recaptured from the English in a daring night raid led by Thomas Randolph, nephew of King Robert the Bruce.

The castle has sheltered many Scottish monarchs. They include Queen Margaret (later St Margaret), who died here in 1093, and Mary Queen of Scots, who gave birth to James VI in the Royal Palace in 1566.

Her great-great-great grandson Charles Edward Stuart – Bonnie Prince Charlie – captured Edinburgh but was unable to take the castle during the 1745-6 Jacobite Rising.

In 1996, the Stone of Destiny, on which kings were enthroned for centuries, was returned to Scotland. It is now displayed in the Crown Room.

In the 1600s, the castle became a military base. Some buildings were rebuilt and new ones were raised to house a huge garrison – and provide a secure jail for prisoners of war.

The military presence remains unbroken, but over the last 200 years the castle has become a national icon. It is now Scotland’s leading tourist attraction, and a key element of the Edinburgh World Heritage Site

Please login or register to add your review.

Us this place for Banner!

Add a business now
Vantage Theme – Powered by WordPress.
Skip to toolbar
We use cookies to ensure that we give you the best experience on our website. If you continue to use this site we will assume that you are happy with it.OkRead more